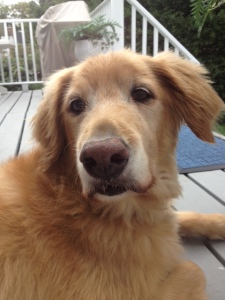 Good health in an eleven-year old Golden Retriever is, I’m told, a blessing. It certainly seems so. Ginger hasn’t had any observable cancer. She is always up for a walk. And she eats well, from a menu that includes bites of string beans, pizza crust, potato skins, cucumbers, even lettuce.

But for the last few years Ginger is asleep much more than she’s awake, often with her head under the bed or couch, her security blanket since she was young. Her jowls are droopy and whiter, and she pants more.

It’s disconcerting to me to see her life pass by so quickly, as if in time-lapse. A puppy ten years ago, a senior now. Except that it’s not quick time–it’s her life at normal speed. Her life stages have synchronized at different ages with different members of her family. When she was a puppy, my two step-kids were approaching their ‘tweens and all three of them were impetuous and boundless. Now, she is more in synch with me, at 69, napping more myself and walking a little slower.

But the commonalities are fleeting and deceptive. It’s easy to feel that because she is part of our daily lives, her life span should have some kind of relationship to ours. But it doesn’t. Ultimately, she is “not-a-human” not only because she looks and acts like a dog but because her time frame is wholly not ours. 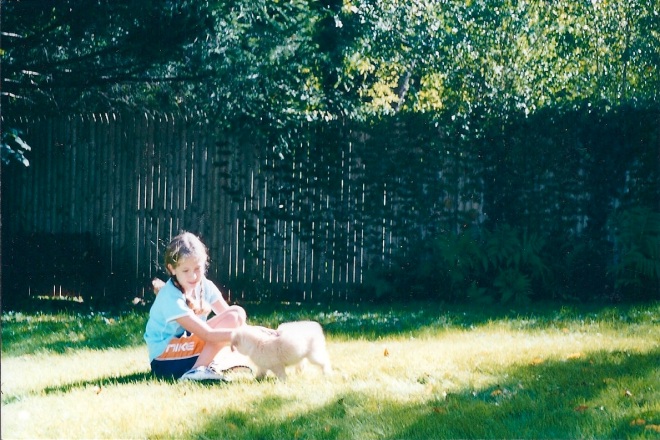 Animals and plants fascinate us in part because they seem to live on a planet where time runs differently. Their stages appear to be similar to ours–infancy, youth, maturity, old age–but Ginger has passed through them with such a different ratio of years allotted to each stage. It has been a normal “dog’s life” to her, but each stage of it differs drastically from the scope of experience packed into the same phases of human life. For comparison, imagine a person who is otherwise normal living out life from birth to old age in twelve years. That person would be, to say the least, unusual at every stage–and at each stage he would become even stranger, by our standards.

Ginger has allowed me to learn, gradually, how different she is and how we can see only a little of the inner lives of other beings.