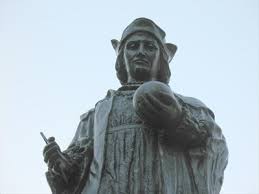 Events both small and large, from a day at the beach to the existence of life itself, have been labeled as lucky.  But I think that exclamations about luck have less to do with the likelihood of events themselves than with our surprise and gratitude, with unexpected joy.

First, a poet’s view. “Lucky Life” recounts Gerald Stern’s joy at finding relief from life’s stresses on a summer day at the beach. (Excerpted chunks of a poem, like the following, do not do it justice.)

Lucky life isn’t one long string of horrors
and there are moments of peace, and pleasure, as I lie in between the blows….

My dream is I’m walking through Phillipsburg, New Jersey,
and I’m lost on South Main Street. I am trying to tell,
by memory, which statue of Christopher Columbus
I have to look for, the one with him slumped over
and lost in weariness or the one with him
vaguely guiding the way with a cross and globe in
one hand and a compass in the other….

Life is “lucky” for Stern not because it is without pain but because it is not entirely pain. The primal cleansing and baptism of a return to salt water always works, unlikely as that seems beforehand. Stern cannot will the waves to cleanse him yet again. There is uncertainty and anticipation. When they do rejuvenate him once more, he feels lucky—profoundly glad and surprised.

On a much vaster scale, the existence itself of living things is—for some scientists—lucky. About 540 million years ago, a burst of new life forms appeared during what is known as the Cambrian explosion. The fossils left behind represented a wide variety of new species. Almost all of these species quickly disappeared except for the ancestors of the vertebrates from which most animals today, including humans, are descended. A stroke of luck? Or a near-certainty? 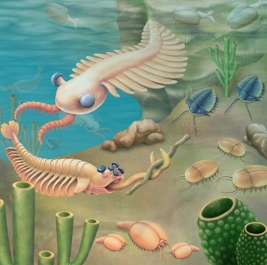 In The Story of Life in 25 Fossils, Donald Prothero recaps the argument of paleontologist Stephen Jay Gould that these Cambrian specimens “underscored the importance of contingency, lucky accidents of life that determine how all the events that follow will pay out….Each time you replay the tape of life’s history, it comes out differently.” Asteroids, volcanic eruptions, other sources of extinction all had a role in the survival of some species and the disappearance of others. Survival of the fittest was not the only player. “The modern world is an improbable, lucky accident, one of millions of possible ways in which the scenario of life could have progressed.”

Others including Richard Dawkins counter that the outcomes of evolution are not such a toss-up, that a replay of life’s history would end with the same general picture of life, and it may not matter anyway. That is, whether our current organic world is the result of accident or inevitability, we like to think of it as “lucky” essentially because it has produced us. Or, as Dawkins puts it in The Ancestor’s Tale: the Dawn of Evolution, “there is no reason other than [our] vanity…to designate [the present result of evolution] as more privileged or climactic than any other.”

Luck has little to do with causality or randomness. It has everything to do with our surprise, of the kind that Stern and Gould express, that the stern necessities of the universe sometimes fall in our favor.