The Clergy Letter Project is a set of letters signed by over 13,000 American clergy supporting the compatibility between science and their own creeds and urging the teaching of evolution in public schools. The Project consists today of four brief, slightly different letters signed by Christian, Jewish, Unitarian Universalist, and Buddhist clergy. It began in 2004 as a response by biologist Michael Zimmerman to anti-evolution policies in a Wisconsin school district. They are a savy, constructive move. 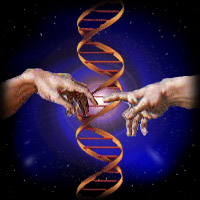 Most or all of the letters affirm that the effort to ban the teaching of evolution or to insert the teaching of creationism violates the separation of church and state. Three of the four letters assert, as stated in the Christian one, that religion and science can “comfortably coexist” but that “science [should] remain science and that religion remain religion.” They point to differences of discourse: the purpose of scientific truth is to convey scientific information while the purpose of religious truth is “to transform hearts.”

Standing apart from this emphasis on differences is the Buddhist letter. It comments not on the separation between the two fields but instead and surprisingly on two ways in which evolutionary concepts are integrated within the rationality of the faith. It points out that all things are interconnected with one another as they develop and that the Buddha himself as well as his incarnations are metaphors for the evolving nature of life.

I found this theme in the Buddhist letter refreshing. Here are religious spokespeople responding to a scientific concept not as a threat but as a clarification and an affirmation. What a contrast not only to the creationist debacle but also to the animosity between many atheistic followers of science and supporters of of organized religion. As the Buddhist letter suggests, close encounters between scientific information and spiritual inspiration need not be destructive in all cases.

In this blog, I try to use my experience of and general knowledge about living things as a resource for responding to my spiritual questions. It’s precisely the non-spiritual aspects of science—its literalness, exactitude, and curiosity—that I find to be spiritually stimulating. They give it authority and reveal some of the sides of nature that are invisible to me. I, like many, admire the Clergy Letter Project’s effort to emphasize the compatibility of science and religion and to reject the creationist intrusion in science education. But I also want to hold open a comfortable acceptance for people who want to bring scientific understanding to bear on their religious outlook.