Recently I sent the National Geographic genome project a sample of my DNA on two Q-tips swabbed inside my mouth. The information I received back described the whereabouts of my ancestors over the last 50,000 years or so. I’d known bits and pieces about my parents’ parents, all from different parts of Europe. But the DNA analysis showed me when their own early ancestors came out of Africa to Europe and what groups they belonged to when they got there.

Long before their journey, about 2 million years ago, earlier human species began migrating from Africa. Then about 60,000 years ago Homo sapiens began crossing Egypt and the Arabian peninsula. When we got to Europe, our cousins the Neanderthals were settled there and we settled down with them. Really, with them. My genetic make-up is 1.1% Neanderthal, which is the average for modern-day non-Africans. 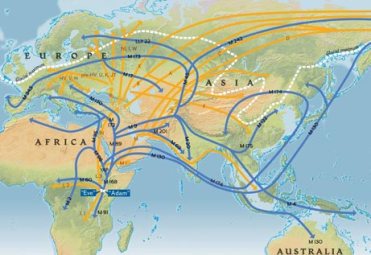 The genome report goes on to describe the two particular migrations on my mother’s and father’s sides out of Africa. On my father’s side, Branch H5 spread into Central Asia to points east and west, around 10,000 years ago. Today, H5 genes are common around the Black Sea and less so throughout Europe. Viking King Sven Estridsen, born in England but king of Denmark from 1047 to 1074, belonged to this group. He may have been one of my ancestors, but more likely he collected tribute from them.

On my mother’s side, Branch L2, about which less is known, left their genetic marker most frequently in Algeria, in northern Africa, but also in Asia and Europe, routes indicated quite clearly on the inset map.

Finally, there is my more recent regional ancestry, the combined information about both parents connecting me to any of 18 population groups around the world six or more generations ago. My genome links to three such groups. Forty-one percent of my DNA is descended from the Jewish Diaspora, the dispersal of Jews from the Near East, in this case into Europe. Thirty-one percent comes from Southern Europeans, the original peoples of the northern Mediterranean Coast. Finaly, 28% comes from Scandinavians, the most recent of the groups, since that area was peopled only after its glaciers melted around 12,000 years ago.

I’ve shared these results with family and friends, with mixed responses. Some find them too general to mean much. But they’ve also set off alarms about the pitfalls of knowing such information—about oneself or about others. The percentages and group identities make it tempting to imagine that a person is the way he or she is because of his or her ancestry—that I’m studious, for example, because of Jewish ancestry. A TV commercial shows a man who enjoys Swiss dances and lederhosen and who then finds from his genome that he is Scots, so he quits the lederhosen and takes up kilts. As if his genes made him suited for one but not the other. Did he feel it would be inappropriate or hypocritical to continue in the lederhosen? That seems not just silly but a little frightening. His genes are not him, not his abilities, not his interests.

True, some physical features, some potential abilities, and predispositions to some diseases are inherited. But our specific and individual characteristics depend as much if not more on the web of family, community, and culture and the flux of time. Saying a person has a specific characteristic because of his ancestral group is a shade less inaccurate than saying he has it because of his astrological sign.

For me, the genome history helps fill in my reveries about ancestors leading their particular lives a very long time ago. I picture a family walking in eastern Europe, another farming in what is now Italy, or a group crossing the water from what we call Denmark, none of them knowing that far in the future, the paths of their descendants will come together in me. I imagine myself greeting them from their future and watching their surprised smiles as they realize who I am and as I tell them how often I’ve been thinking of them.

One thought on “My Genome and Me”