Psychologist Michael Graziano proposes that our consciousness is more mechanical and less mysterious than we think. But he argues as well that this theory does not diminish the validity of our spiritual experiences.

Graziano, in Consciousness and the Social Brain, fully appreciates what our consciousness, our awareness, means to us. It is “the spark that make us us. Something lovely apparently buried inside us is aware of ourselves and of our world” (Kindle location 66). And many of us believe this lovely spark to be our spirit, even our soul. 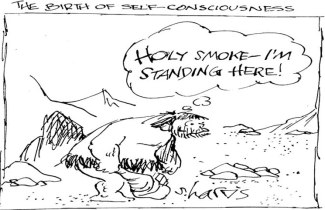 But how does it work? Despite all that neuroscientists know about the brain, what remains elusive is how it goes about giving us the experience of being aware, awake, taking it all in. Theories suggest that the brain’s signals are “boosted, improved, maintained, or integrated” in some way that creates the sensation of awareness. But they don’t say how.

Graziano’s explanation is not really complicated, but it is so different from our everyday experience that it helps to understand first the main concept that it is built on, one that is well-established in neuroscience. This concept is that the brain recognizes things because it makes simplified models of them, shorthand versions that are similar to codes or diagrams. Examples of these schema include the formula a child’s brain will store away for identifying a dog (four legs, fur, friendly) and the sequence that adults know for entering a restaurant and ordering food. The brain stores such schemas and uses them to identify and even to imagine.

The twist that Graziano adds to the schema idea is that our consciousness itself is a schema, the brain’s shorthand version of the act of paying attention. “In the present theory, awareness is an attention schema. It is not attention but rather a simplified, useful description of attention” (377). As for attention itself, it is an actual, physical activity; it “lights up” sections of the brain in ways we can take pictures of. The attention schema, on the other hand, is a simplified model of that activity as it is stored by the brain.

Here is Graziano’s proposal in a nutshell. Take the example of a moment when we look at the bright green of spring and think, perhaps wordlessly, wow, what a bright, lovely green.

Suppose that you are looking at a green object and have a conscious experience of greenness. In the view that I am suggesting, the brain contains a chunk of information that describes the state of experiencing, and it contains a chunk of information that describes spectral green. Those two chunks are bound together. In that way, the brain computes a larger, composite description of experiencing green. (317)

Once that description is in place, other parts of our brain can verbalize it. We can say, “The green on this leaf is beautiful.” We are not experiencing green directly; a “color” is physically only electric and magnetic waves. We are experiencing the brain’s combination of two of its descriptions, the schema of greenness and of conscious attention.

Such a view has prompted me to experience my own conscious awareness a little differently. I think it is like a camera that clicks twice every time it takes a picture. One click is the picture of the object in front of it, the second click is the camera recording that it took a picture. When I think to myself, like the man in the cartoon above, “I’m standing here” or some other self-aware thought, there is a click of noticing what’s around me and another click of noticing my noticing.

Graziano adds that the attention schema comes with a GPS marker. The GPS usually locates the attention experience as “inside our head.”

But often it locates awareness inside someone else’s head, when we are imaging what other people might be thinking, saying, planning.

Or it might locate awareness in our dog, in thunderstorms, in luck, or in a god. Or floating above our body when our brain is compromised during surgery and we have a near-death experience. And Graziano,  a “passable” ventriloquist, notes how readily an audience will locate awareness and attention in a wooden dummy.

Finally, one might expect a prominent psychologist such as Graziano to take a dim view of religious and superstitious beliefs. But in fact he eloquently embraces spirituality in particular. It is, after all, a matter of consciousness.

To me personally, the most reasonable approach to spirituality is to accept two simultaneous truths. One, literally and objectively, there is no spirit world. Minds do not float independently of bodies and brains. Two, perceptually, there is a spirit world. We live in a perceptual world, a world simulated by the brain, in which consciousness inhabits many things around us, including sometimes empty space….The perceptual world and the objective world do not always match. We sometimes must live with both sets of knowledge. Neither side can be ignored. (2946)

In the present hypothesis, people intuitively understand consciousness to be spirit-like because the information representation in the brain encodes it in that manner. [The spirit concept,] the diaphanous invisible stuff that thinks and perceives and flows plasma-like through space and time,… that normally inhabits the human body but can sometimes flow outside of it, and that therefore ought to be able to survive the death of the body—this myth so ubiquitous in human culture is not a mistaken belief, a naïve theory, or the result of superstitious ignorance, as many scientists would claim. It is instead a verbalization of a naturally occurring informational model in the human brain. (1154)

For me, Graziano’s work affirms the spiritual value I find in the presence and the history of living things. This is not only because of his acceptance, just described, of people’s spiritual awareness. It is also because his analysis of consciousness helps me to see it as the work of natural selection. I see human consciousness as a unique elaboration of the capacities for perception and memory that are found in simpler forms in the brains of other and earlier animals.