Animals and Plants, in the upper right corner, no longer headline the Tree of Life.         (Wikipedia)

The most basic categories of living things are not what they used to be. In the past they included Plants and Animals, but no longer. Today the three Domains are all named for organisms too small to see. Plants and Animals, including humans, have become small print within a Domain called Eukaryotes (you-CARRY-oats), meaning cells with a nucleus.

A second Domain is Bacteria. The third is the Archaea. Not sure how to pronounce Archaea? I wasn’t either. It’s AR-kee-ah or ar-KY-a; both are acceptable. That noun is plural; the singular is AR-kee-on, an Archaeon, sounding faintly of Star Wars.

Archaea are like Bacteria in that they have no nucleus and are simpler, smaller and older than Eukaryote cells. So how are these Archaea so different from Bacteria that they get their own Domain? Biologist Carl Woese in 1977 argued successfully they are indeed a different form of life. I’ll describe a few features that Archaea and Bacteria have in common and then others that seem unique to Archaea.

Both Archaea and Bacteria are small, unstructured, and simple compared to the Eukaryotes that evolved. But one achievement they both share has been to try out nearly every possible chemical or environmental source to get their energy. Sunshine, salty water, temperatures ranging from volcanic to polar, even radioactive settings—varieties of Bacteria and especially Archaea have found ways to draw energy from, and live off of, these and other environments.

Another similarity is that Archaea and Bacteria don’t reproduce sexually; two cells don’t mingle their genes to form a new individual. Instead, individual cells just multiply their insides by two and then divide to form identical daughter cells. To put some variety into their DNA, they both use a technique other than reproduction. A Bacterium or Archaeon can pump some of its DNA into another cell. Or a cell can just pick up a bit of DNA floating near it. No merging, just some sharing. This gene-sharing is called lateral gene transfer. It is important to know about. 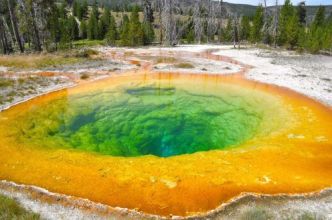 Archaea at home in a Yellowstone hot spring.       (earth-chronicles.com)

For starters, gene sharing is one reason that antibiotic-resistant bacteria in hospitals can spread their immunity to other bacteria so quickly. And gene sharing  doesn’t have to take place between members of the same species, as sexual reproduction usually does. Instead, DNA can be transferred from any species of Bacterium or Archaeon to any other species within the same Domain if the conditions are right.

If plants and animals could carry on such gene swapping, the mind boggles. Squirrels could transfer some of their DNA over to dandelions. Or vice-versa. Such promiscuity helps explain how Bacteria and Archaea have evolved so many different ways to live in extreme environments, as well as so many different colors.

But Archaea are also distinct from Bacteria in notable ways:

Archaea and Bacteria had the Earth to themselves for over a billion years. Then about two billion years ago, Eukaryotes appeared, evolving from their single-celled predecessor but larger and internally more developed. By then, Archaea, like Bacteria, had carried out much of the groundwork for living, pioneering what it takes to survive in different conditions, experimenting with energy sources, trying out each other’s genetic parts.

And they succeeded. They didn’t fade away after the sophisticated Eukaryotes began evolving into countless large species like us. Today, their total mass is right up there with all the plants and animals combined. Humans each carry around a few pounds of them.  They got the basics right. We are among the beneficiaries.