I’ve been following discussions over at the Religious Naturalist Association about the origins of life and the research by scientists Terrence Deacon and Jeremy Sherman. Their ideas are complicated, drawn from physics, chemistry, biology, and philosophy. But as I’ve absorbed the basics, they have deepened my understanding of being alive. Here is the thesis: Living things probably arose as cycles in which groups of molecules self-organized and self-renewed and reproduced. What I’ve learned is that similar cycles have permeated all levels of life ever since.

This approach to the origin of life starts with a close look at things that are not alive. Inanimate gasses, liquids, and solids all lose their molecular organization sooner or later: gas molecules disperse; liquids evaporate; solids, even rocks, eventually break down. In contrast, certain groups of molecules come together and react to each other in such a way that they don’t fizzle out or disintegrate easily.

To explain, two terms need introductions. A catalyst is something that quickens a reaction without being changed itself. Jeremy Sherman likens a catalyst to a wheelbarrow: we can move a load of rocks more quickly and easily with one than without one and we can use the wheelbarrow again and again. Another catalyst is the chemical in the catalytic converter of a car’s exhaust system. It converts the polluting gasses from the motor into the carbon dioxide and water that leave the tailpipe without itself being used up. Finally, our bodies rely on re-usable enzymes–catalysts–for essential reactions such as digestion.

The other term is encapsulation, the formation of a capsule or other container around something. Enclosures are everywhere in organisms. Animals have skin; plants encase themselves in an epidermis or bark; cells, arteries, and neurons depend on their membranes and walls. Even viruses come enclosed in “capsids” that hold them together. Such boundaries keep components together and keep the outside world out.

The scenarios that follow are my way of describing a series of reactions that would notat first, and then finally would, become active and stable long enough for organic evolution to take hold. Combinations of specific chemicals could be filled in here. But the focus in Sherman’s and related accounts is not on lab results. It is on the interactions necessary to produce stable cycles of self-repair, self-protection, and self-renewal.

The interactions here may be difficult to follow the first time through—they were for me—but hang in. It’s the beginning of life we’re talking about.

Molecules of A and B, drifting in the environment, sometimes bump into each other, fit together (because molecules have shapes), and bond to form a molecule of Y. But the rate of such interactions is nothing out of the ordinary. No sign of life here.

Sometimes A and B float around and come together in the presence of a molecule of a catalyst, X, which makes the bonding of A and B easier and faster as they form molecule Y. Cat X remains unchanged, detaches from Y, and goes on to facilitate the same reaction with other As and Bs nearby. But this reaction too is nothing out of the ordinary as long as catalysts are available, and it fizzles out after the As and Bs in the area are turned into Ys. Another dead end.

Now, catalysts work only for specific reactions. Cat X bonds only A and B. So the rapid bonding of M and N requires a different catalyst. It happens that the molecule that catalyzes M and N turns out to be Y, the molecule that A and B are churning out. So Y is the catalyst that links M and N together rapidly to form X. X and Y, in other words, each serve as the catalyst for the reaction that makes the other one.

So we have a rapid—in fact, an accelerating—reaction. But can it go on for very long? When the fuel molecules (A, B, M, and N) run out, so will the reaction. The catalysts will drift away. Where do we go from here? Can the catalysts be contained and refueled somehow? 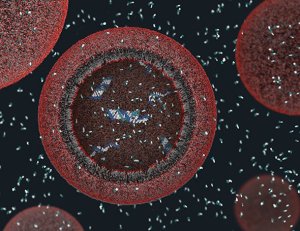 Yes they can. A and B and M and N produce by-products, L, that tend to link with each other and form a capsule or enclosure. Such capsid formationor encapsulation is common with some large molecules. Capsids forming around a bubbling autocatalytic reaction would have an intensifying effect, at least for a while. Sherman writes:“Imagine autocatalysis occurring within a container. It would look a little like a very simple cell—a chemical population explosion occurring within something like a cell membrane.” Importantly, the container also prevents the catalysts X and Y from drifting away when they have nothing left to catalyze.

But any capsule left to itself will eventually break up. When that happens, the catalysts inside will float around and come in contact with new fuel molecules (A, B, M, and N) in the environment and the cycle will begin again. It’s all in the timing: the container forms in time to constrain the dispersing catalysts and breaks up in time to allow them to find new molecules to help connect.

Terrence Deacon calls these auto-generating, sometimes-enclosed, not-quite-cells autogens. Over time, as some types of autogens outnumber others, selection will favor those that carry additional refinements. A template of some kind, for example, may preserve previous sequences—an early version of DNA. And some capsules may have surfaces that are most likely to open amidst an abundance of fresh fuel molecules. As autogens persist, renew, and evolve, they grow closer to full cell status—to life.

Scenario 4 is very compressed and may seem far-fetched, but look around. From microbes to mammals, living things operate as cycles in which two processes constrain each other. We take such cycles for granted, but they constitute being alive. For example, it’s winter here now and some plants have died off while their hardened, closed seeds lie dormant. Soon, in spring, the seeds will wake and open. Then flowers will blossom and produce new seeds for the following winter and spring.

Another example: we humans grow tired at night, close our bodies down into sleep, and then wake, refuel, and return to work at our biological self-repair, self-protection, re-production. Our hearts, lungs, digestive tracts and other organs fill and empty all life long, containing our bodily processes that sustain the bodily containers.

Sherman captures the gist of it:  “Selves resist nonexistence” (192).  Living things, humans included, stay busy staying alive. Being alive is our great achievement, one that we were born with. But I had not glimpsed the web of active and constraining phases, the magic-like catalysts and the genius of containers that are at work.

Eventually, I, the family dog, and the fern at the kitchen window will not repeat our cycles another time. Until then, though, we take part in the billions of years of life tuning itself to the play of matter and energy and to the rhythms of the planet.

This article is based on Jeremy Sherman’s  Neither Ghost Nor Machine: The Emergence and Nature of Selves, 2017. Sherman’s book, in turn, is a presentation of the insights of his mentor and friend Terrence Deacon of the University of California, Berkeley. And this approach to the origins of life was first explored by Stuart Kauffman in Origins of Order: Self-Organization and Selection in Evolution, 1993.

A comprehensive Wikipedia entry about the origins of life is “Abiogenesis.”

2 thoughts on “Lessons From the Origins of Life”