Darwin has gotten to me. The third chapter of On the Origin of Species has changed how I look at nature. The name of the chapter sounds quaint at first: The Struggle for Existence. But it is an apt name for a dark, violent vision.

For Darwin, the central reason that life is a struggle is the numbers. Seeds, larvae, eggs, babies—most living things reproduce in big numbers, every year. We modern humans with our small families and our one or two pets don’t think of reproduction on that scale.

But, as Darwin writes, we should not forget that in truth “every single organic being around us may be said to be striving to the utmost to increase in numbers; that each lives by a struggle at some period of its life; that heavy destruction inevitably falls either on the young or the old…Lighten any check, mitigate the destruction ever so little, and the number of the species will almost instantaneously increase to any amount.”

And then this astonishing simile: “The face of Nature may be compared to a yielding surface, with ten thousand sharp wedges packed close together and driven inwards by incessant blows, sometimes one wedge being struck, and then another with greater force.”

The invasive purple loosestrife. Each plant produces one million seeds each year, every year. (fenton.patch.com)

We don’t notice the intensity of this competition in part because plant life takes place in slow motion. Darwin studied what lived and what died; he counted the seedlings in a patch of his yard and saw that most did not survive the struggle against competing weeds and insects. “We behold the face of nature bright with gladness, we often see superabundance of food; we do not see, or we forget, that the birds which are idly singing round us mostly live on insects or seeds, and are thus constantly destroying life; or we forget how largely these songsters, or their eggs, or their nestlings, are destroyed by birds and beasts of prey; we do not always bear in mind, that though food may be now superabundant, it is not so at all seasons of each recurring year.” 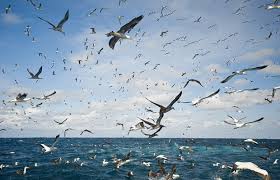 Whether an animal is sustaining itself or is destroying other life is a matter of point of view.  (telegraph.co.uk)

Darwin uses the word competition for to point to one conflict or another, but elsewhere he doesn’t find that word sweeping enough. And indeed today, for us, the term usually refers to what goes on between two individuals or teams or companies and the like. Struggle, however, points to competition in all directions at once—to the competition between a living thing and others of its own species, competition with other species, struggle against disease, against climate. It is the intensity of this struggle between the numbers of one’s offspring pitched against the strength of the adversaries that makes natural selection so effective. Any advantage, no matter how small, is big.

At the chapter’s end, the vision of the struggle slides over to “war”—along with a dubious consolation. “When we reflect on this struggle, we may console ourselves with the full belief, that the war of nature is not incessant, that no fear is felt, that death is generally prompt, and that the vigorous, the healthy, and the happy survive and multiply.”

Along a roadside, the slow-motion war goes on. (nps.gov)

Where I live, the plants and insects look vigorous and healthy as always, but I see them differently now. In the small overgrown zones between suburban backyards and along roads, I used to see beauty, vitality, and tranquility. That is what we are expected to see in nature, after all. But now I look first at what plants are the greatest in number; they are, at the moment, the winners. They are the best adapted, putting other plants out of business in slow motion, and producing the most variations that might make their offspring even fitter.

Humans are similarly primed for struggle and competition of all kinds. Even here in suburbia, we are all alert to shortages or price increases in food and fuel, to drought and flood, to violence and car crashes, to drugs and diseases, to potential enemies in the neighborhood and in the world—“incessant blows” on the “sharp wedges” that are driven in on the “yielding surface” of our lives.