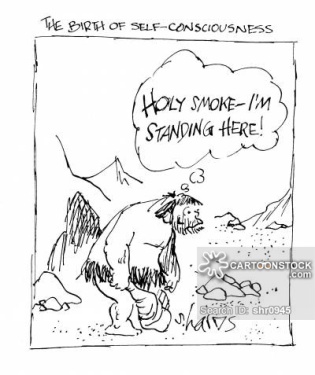 Michael Graziano, a neuropsychologist I’ve posted about before, writes in the June 2016 Atlantic about how consciousness might have evolved. He starts with the question that evolutionists ask about any feature of an organism: What is its adaptive value?

The answer, he writes, is that consciousness is a sophisticated solution to a difficulty that plagues the nervous system of all creatures: “Too much information constantly flows in to be fully processed.” It’s an old dilemma, with early fixes. Even before the formation of brains, nervous systems 600 million years ago enhanced certain nerve signals at the expense of others. The eyes of insects and crabs, for example, generate “an outline sketch of the world” as signals carrying data about where the edges of objects are  located come in stronger than other visual signals.

Then around 500 million years ago, a controller in the early brains of fish and reptiles began coordinating several senses at a time, “aiming the satellite dishes of the eyes, ears, and nose towards anything important.” The controller did so by generating an internal model, a set of information about the current state of the body parts, and predicting “how these body parts will move next and about the consequences of their movement.” If you had only a reptilian controller for a brain, you would look at the steps in front of you and the controller would check those signals against its model of where your legs ought to be to get you up the steps successfully.

But we have much more than a controller. Some mammals, including us, have the latest upgrade, the cerebral cortex. We can pay attention to something we are not even focused on at the moment—the TV in the other room, for instance—because our cortex can select what to select. What’s more, we can even be self-aware that we are doing so. “I’m not going to go in there, but he’s watching that news again” (my example). Humans can do this because our upgraded controller uses schemas, models of not only all that we know but also of our attention itself. Our brain tracks “what covert attention is doing moment by moment and what its consequences are.” This is where we get that self-aware voice inside us that tells us, “I’ve got something intangible inside me. It moves around from one thing to another and allows me to understand and remember.”

Such evolution of consciousness goes hand in hand with our social evolution, according to Graziano. Animals acquired the capacity to be aware of the mind of other members of their species. Social awareness and self-awareness have evolved “in tandem….We understand other people by projecting ourselves onto them. But we also understand ourselves by considering the way other people might see us.” Consciousness tracks and grows from our social life and our social self.

Graziano acknowledges that the schema theory of consciousness is still new, but he believes it “provides a general framework” for understanding consciousness and its evolution. It seems to me that it does so very well. It’s difficult for us to see our minds in physical terms because we have that voice in our head that insists, “Wow! I’m thinking and feeling all this!” Feeling this cerebral glow, we easily believe we carry an ethereal self, even an undying soul. But I think it’s the opposite conclusion that is exciting: that the splendor of consciousness is not that is an outlier in nature but that it is a thoroughly earthly step in the series of small, pragmatic adjustments that is evolution.