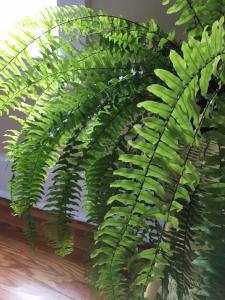 Ferns are all leaf, all the time—no celebrated flower, no seduction of the insect. At the tips of green sprouts, curled fiddleheads unroll while leaflets widen behind them like the wakes behind boats. My store-bought Boston fern, tended for years with no expertise, is a fountain of green, its dazzling fans of leaves arching up, out, and over.

Before ferns, plants were creatures of the water, with no need for roots or stems. But about 450 million years ago, Earth passed through the first of its five mass extinctions (so far). The climate cooled, water froze, glaciers grew, the sea level fell, coastal and ocean habitats disappeared. But new land was exposed, and when the climate warmed again, plants grew there.

The first of these land plants were mosses. Carpets of moss sprang up along lakes and streams. But without deep roots or firm stems, mosses grew no higher than a few inches. Thriving on land requires tubes that can carry liquids up and throughout an organism. Ferns were among the earliest plants with roots to dig deep for water, and with stalks and stems to transport it throughout the plant. Vascular tissue changed everything. Ferns reached the height of trees.

And ferns grew very efficient leaves. They needed them to capture carbon dioxide whose levels fluctuated widely over the millennia. Whenever the atmosphere’s declining carbon dioxide led to cooling temperatures, the hundreds of leaves on even a small fern could soak up enough to keep it going. Today, healthy ferns withstand cold weather better than most plants.

Ferns have multiplied the world over in part because of how they propagate. They were and are old-fashioned and deliberate about sex. Instead of reproducing through miniaturized plants embodied in seeds, ferns spread through spores, single cells released from the underside of the fronds. When the spores settle on moist soil, they grow into a tiny intermediate plant that will create the male and female components for the start for a new fern. Spore propagation seems an overly complicated, two-step process, but the lightness of the spores lets them disperse on the wind and germinate on distant moist soil.

Some days I stare at a plant whose distinctive features date back nearly 400 million years. No other plant or animal that I see every day goes back almost to the beginning of life on land. A fern’s ancestors invented leaves and roots and the old method of reproducing.  They survived four mass extinctions, as well as the flowering plants that burst on the planet 125 million years ago and came to dominate the plant kingdom. Ferns watched the dinosaurs come and go. Today they regale us with tales of ancient climates and their ingenious survival skills.