If our expectations of happiness sometimes seem off-kilter, it’s because our understanding of emotions in general is not always accurate. It is tempting to think that emotions are available in pairs, that each pleasant emotion comes with a distressing version: happiness matched with sadness, bravery with fear, contentment with  frustration. And we might expect that people experience emotions in a wide range of intensities and durations. Depending on the person, sadness might last for a day or a decade, mildly or intensely. And so might its counterpart, happiness.  As the sign says, we think, “Happiness has no limits.” 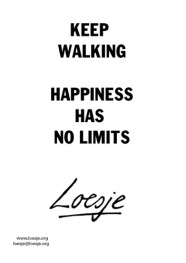 But in How the Mind Works, Stephen Pinker says not so fast. For starters, “There are twice as many negative emotions (fear, grief, anxiety, and so on) as positive ones.” Try to count the common unpleasant emotions that come to mind, then try to think of the same number of positive ones.

Another clue that emotions don’t come in positive and negative versions in all varieties is that “[P]eople’s mood plummets more when imagining a loss in their lives (for example, in course grades, or in relationships with the opposite sex) than it rises when imagining an equivalent gain.” Pinker quotes tennis star Jimmy Connors: “I hate to lose more than I like to win.”

So not only are negative feelings more plentiful than positive ones, but they pack a stronger punch as well.

Why? The benefits of happiness and the other positive feelings are, in evolutionary terms, more limited than we might think. Pinker: “The psychologist Timothy Ketelaar notes that happiness tracks the effect of resources on biological fitness. As things get better, increases in fitness show diminishing returns: more food is better, but only up to a point. But as things get worse, decreases in fitness can take you out of the game: not enough food, and you’re dead” (392).

So the dangers of of injury, illness, and enemies call for variable levels of distress to signal the seriousness of the threat—emotional smoke alarms that can grow louder and last longer as the threat intensifies. But the joys of health, sociability, creativity, and even spirituality don’t call for such intensification. In the long run, we wouldn’t gain from a capacity for increasingly intense joy or confidence or satisfaction or excitement. Too much joy for too long and we let our guard down.