Creation narratives are lively stories.  In the Bible, God creates the universe and earth in six days. In other traditions, creatures are dismembered, huge eggs hatch, birds create land.
Even science’s own creation narrative starts with a Bang. And after the Earth takes shape, about 4.5 billion years ago, the first organic molecules appear relatively quickly, less than a billion years later.
But at that point the scientific story of life slows way down. Life remains at the stage of single cells for the next two billion years. What was happening to our smallest, oldest ancestors all that time? Why did it take so long to move beyond the stage of one-only? Was evolution on hold?

What took so long was the creation of the building blocks for complex life.

It’s a story with parallels to the first chapters of Genesis. Here’s the biblical sequence of the first living things. Plant life appears on the third day, including “fruit trees bearing fruit in which is their seed.” On the fifth day (the fourth day sees the creation of the sun and moon), creatures of the water and air, including fish, sea monsters, and “winged fowl”, all directed to be fruitful and multiply. On the sixth day, the first human appears. Then, a few verses later, we read about the Garden of Eden and, symbolically, the beginnings of sex and death.

For comparison, here is a summary of science’s version. Life evolved from the simplest cells to cells with a nucleus that enclosed the protected “seed” of DNA. This change set in motion the end of one kind of immortality, the beginnings of sex and death, and the emergence of a new immortality.

Science’s version took much longer than a week. But like the Biblical version, it too took place in overlapping stages.

LUCA
Like the Bible, science has a name for our first ancestor. LUCA, our “last [most recent] universal common ancestor,” was a single-celled organism, a kind of bacterium, from which all life on earth is descended. Inside LUCA was a floating coil of DNA, sections of which have been passed down to every living thing. 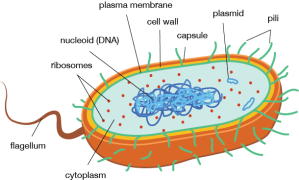 Our common ancestor, a cell with DNA but no nucleus
(shmoop.com)

LUCA reproduced simply by dividing, with one set of genes in each new cell. The new cells were identical, a long line of Adam clones without an Eve.

LUCA’s membrane enclosed only watery liquid and the genes. Gradually LUCA’s descendants “ate” and absorbed other bacteria. Some of these bacteria turned into the nucleus of the cell that absorbed them. They became the container for the cell’s genes. Such cells advanced from  prokaryotes (before a nucleus) to eukaryotes (a true nucleus, and pronounced “you carry oats”). The nucleus was a seed, a seed that provided the DNA with a chemical environment of its own and helped grow more complex DNA and much larger cells.
Sex, Death…

Early cells were, in their own way, immortal. The genes in both prokaryotes and early eukaryotes would reproduce and then the cell would split into two identical cells, as bacteria still do. Did such cells die? Eventually, but only from accident or the environment. In this Eden, cells did not get older. They became their own offspring and could theoretically live forever.

Eukaryotes, however, found a new way to reproduce. One would rub up against another eukaryote and portions of their DNA sets would be inserted into the other—the original sex act. With this exchange of DNA, genetic variation sped up, at last. So did natural selection.
In the next step, sex became specialized. As some early organisms became multi-celled, such as algae, they reproduced not by division of the whole parent organism but, as with us, by means of specialized germ cells (not the disease kind of germ but the creative kind, as in the “germ of an idea”).
No longer was the parent reincarnated in a clone, as in bacteria. It was left behind, and it aged and died. As in Genesis, the co-mingling of different living things brought sex and death. Cellular life moved beyond Eden.
…and Immortality
So we have lost the immortality that the prokaryotes enjoyed. But we have found it in another, more complex form. Our immortality runs through the genetic line of our children and other blood  relatives. It turns out that it is not the body, the soma, that is the crucial package. It is the germ cells that carry the DNA forward.
But is this an adequate and satisfying idea for us humans who dream of living forever? Is the continuity of DNA a meaningful form of immortality? Here is one answer from Harvard biology professor George Wald, in his 1970 lecture on “The Origins of Death.”
We already have immortality, but in the wrong place. We have it in the germ plasm; we want it in the soma, in the body. We have fallen in love with the body. That’s that thing that looks back at us from the mirror. That’s the repository of that lovely identity that you keep chasing all your life. And as for that potentially immortal germ plasm, where that is one hundred years, one thousand years, ten thousand years hence, hardly interests us.
I used to think that way, too, but I don’t any longer. You see, every creature alive on the earth today represents an unbroken line of life that stretches back to the first primitive organisms to appear on this planet; that is about three billion years. That really is immortality. For if the line of life had ever been broken, how could we be here? All that time, our germ plasm has been living the life of those single celled creatures, the protozoa, reproducing by simple division, and occasionally going through the process of syngamy — the fusion of two cells to form one — in the act of sexual reproduction. All that time, that germ plasm has been making bodies and casting them off in the act of dying. If the germ plasm wants to swim in the ocean, it makes itself a fish; if the germ plasm wants to fly in the air, it makes itself a bird. If it wants to go to Harvard, it makes itself a man. The strangest thing of all is that the germ plasm that we carry around within us has done all those things. …
I, too, used to think that we had our immortality in the wrong place, but I don’t think so any longer. I think it’s in the right place. I think that is the only kind of immortality worth having — and we have it.