We cannot live without some sorts of make-believe in our lives. Without made-up maps of the world, life is a buzzing, blooming confusion. Some elements of our mental maps (Santa Claus) satisfy emotional or aesthetic inner needs; other elements of our mental maps (a hot stove) satisfy intellectual curiosity about the world out there. We get in trouble when the two kinds of maps are confused, when we objectify elements of make-believe solely on the basis of inner need.

The passage is from Chet Raymo’s book Skeptics and True Believers: The Exhilarating Connection between Science and Religion (1998). Raymo is Professor Emeritus of Physics, raised as a Catholic, with a religious sensibility alongside a firm skepticism. He recently stopped posting on his blog, Science Musings, but the inspiring archives remain open.

We all carry around mental maps of the world—images and words that guide us—that should not be confused with the real world itself. Raymo writes about the two kinds of entries on our maps. Some entries reflect our neediness, since we were children, for emotional comfort, simple explanations, and a sense of our own importance. Santa Claus is on the map for many children. When we’re adults, other superstitions, miracles and astrology often take Santa’s place. Such beliefs help many of us make sense of the world. They also help us feel we have a place in it, for there is nothing worse than thinking that we are only insignificant specks.

As Raymo puts it, these are beliefs about what we yearn for. In contrast, we also put on our maps more objectively realistic items that we learn about. These include the facts that stoves can burn us and that dinosaurs and humans did not walk the earth at the same time. 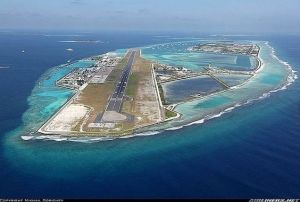 An artificial island in the Maldives, in the Indian Ocean
(pinterest)

But—and here’s what makes the book so valuable—Raymo is not saying simply that we should value the learn items and let go of the yearn ones. For a person who values only objective knowledge runs the risk of becoming cold and arrogant. We need a mix of worthwhile knowledge along with an appreciation of what we don’t know and yearn to understand.

Raymo’s central metaphor for all this is that our map resembles an island in a sea of mystery. The island is our knowledge and the sea is the actual, mysterious, and infinite universe around us. On our island, “We dredge up soil from the bed of mystery and build ourselves room to grow. And still the mystery surrounds us. It laps at our shores. It permeates the land.” When such thinkers as Galileo and Einstein illuminate some of the mystery, that mystery sweeps in on a tidal wave and overwhelms much of what we thought we had known for sure. So we rebuild.

As we expand the island and extend its shores, the border between the land and the sea, instead of shrinking, grows longer. That is, the more we know about the objective world, the more that the mysteries of existence beckon the scientists, artists, and other creative people who are open to them. Raymo’s book appeared in 1998, but his metaphor of this extended shoreline fits well with recent discoveries of the many planets circling other stars and with the neuro-imaging of the brain. Both advances in knowledge have, instead of dulling our sense of mystery, excited and extended it.

Where on the island, Raymo asks, do we find the best and most creative work being done? At the shoreline. “We are at our human best as creatures of the shore, with one foot on the hard ground of fact and one foot in the mystery of the sea.”

The stance describes Raymo himself. And it reminds me that to relish both our knowledge of living things along with our sense of the mystery of being alive is a good place to be.